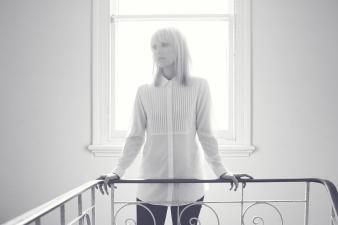 I started writing songs a few years back and have always been drawn to scenery and stories so I try to incorporate that into my songs. I listen to lots of movie soundtracks because I like the way the music enhances the visuals. I also just write as many songs as possible waiting for the good ones to come out. I write and play with other producers, songwriters and musicians too so I can learn how other people develop their craft.

You’re one of the winners of our Laneway competition and will be opening the festival in Melbourne - what can Laneway punters expect from the Ali Barter live show?

I am playing my set at Laneway with a couple of awesome boys. I will be playing my pink silvertone and they are providing the bass, guitar and MPC – which will be fun. It’ll be a slightly stripped back version of my EP. I am playing about 3 new songs too which will be good to air some new stuff.

Tell us about the bands, producers and people in the Melbourne music community that inspire you?

I play with a guy called Jumpin’ Jack William who is an incredible folk singer, guitarist and songwriter. Playing music with him is like having a conversation – I learn a lot from him. The man who produced my EP – Matik, is awesome. He really brought my songs to life. He works with hip hop artists, folk and country artists as well as pop musicians - he has an amazing scope for music. This makes him really special to work with as a producer. I worked with some amazing film-makers, photographers, artists and designers on a music video recently. They are an incredible community of people working together to make beautiful things. Melbourne producer and artist Thrupence is another clever man. He did the artwork on my EP and makes lush and beautiful beats.

What's the best advice you've been given and by who?

My friend Steve tells me to relax. It might not be the best advice but it's definitely the most frequent

Recording an album, playing lots of shows, making a couple of videos, writing lots of songs.