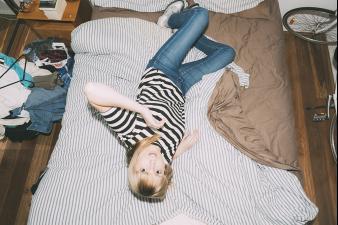 This Sydney lass is a classically trained pianist who grew up listening to Carly Simon, Janis Ian and Blondie. After getting positive feedback from her home recordings posted on the internet, she decided to record her debut EP (Prime) professionally. Her heart-felt lyrics rest gently amongst her jazz-influenced piano playing.

I cant really write about my own music, i'm a terrible self critic but if I had to describe it I would probably say its progressive as in I like to change the sounds around and I often am jumping from one melody to another quite frequently.

How do you go about writing a song? Lyrics or music first?

For the songs on the Prime EP I started out by writing lyrics and then sitting down at my piano and coming up with chords and progressions but lately when writing for my band I have been coming up with lyrics as I write the music.

Who would you most like to tour with or learn from as a songwriter?

What was the last CD you bought? what made you buy it?

What do you do when you're not making music?

Working at a media agency, hanging out with my boyfriend who is also my guitarist in Cameras, playing some social tennis, eating a lot...

Well cameras have just recorded a 4 track demo and we're currently rehearsing for some up coming gigs. We plan to eventually write and record an album and tour.