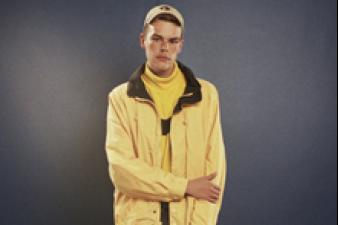 Brisbane producer Golden Vessel has got us swooning over his silky smooth production, fluttery synths and choice collaborations.

Read Interview
Tell us about your music. How did you develop your sound?
I bought a synth when I was fourteen and started a band with some mates. We played one show and then called it quits and because I'd just spent all my pocket money on the synth, I decided I better keep making music. I bought Ableton and started making really amateur Breakbot-ish piano funk but slowly evolved to making chill electronic when I discovered artists such as Toro Y Moi, Caribou, SBTRKT, Chet Faker and Flume. I just worked at it for a couple of years and then started the Golden Vessel when I was 16
What’s your greatest source of inspiration for making music?
I get really inspired by sound, whether that's hearing other artists or mucking around on Ableton and coming up with new sounds or hearing something cool on the street and recording it on my iphone.
What can punters expect from a Golden Vessel live show?
I perform live with my mate Connor (aka Whisperer - another Unearthed artist) and so he covers most of the vocal parts and guitar and I play a lot of keys / percussion. I'm also currently making some custom midi controllers with a friend so I'll start to roll them out on stage sometime soon too. I really love live shows that are unexpected and take twists and turns that aren't present on the EP, so I try and pursue that same experience with my live set.
What’s the best advice you’ve been given and who was it from?
I think it was from Caleb Hodges from Art of Sleeping who told me two years ago to take my time with releasing music and not to rush anything when I was really eager to drop a lot of average content. That advice just helped me to take a step back and continually work at my craft.
What Australian track would you play to cheer up someone who was crying?
GOVS - Let's Go! I love this guy and this songs super uplifting and fun
What Australian track would you play to someone to make them cry?
Cousin Tony's Brand New Firebird - Melbourne Bitter. I just discovered these guys on Unearthed and can't stop playing this song on repeat.
You’re the DJ at a party. The dance floor is pumping. What Australian track do you put on next?
Cosmo's Midnight - Walk With Me (feat. Kučka)
What was the last local gig you went to? How was it?
On the weekend I went and saw my mates Ivey and Tiny Little Houses then popped over and caught UV Boi. Both shows were A-grade.
Tell us about the bands or people in the Brisbane music community that inspire you.
Brisbane has an awesome little hub of people extremely passionate about music that help each other out and build each other up. Especially my boys cln and Feki have really stretched and encouraged me as a musician as well as my fam OK Badlands, Whisperer and Wash who all constantly help each other out in every way possible.
What are your plans for the rest of 2016?
So my 'Before Sleep' EP is out in June and I'm doing a little Aus tour so keep an eye out for that. I'm also doing a fair bit of production work for some artists in Brisbane. I'm especially excited for the new OK Badlands EP that I'm producing. It's gonna be a fun year.
View Profile Hide Interview