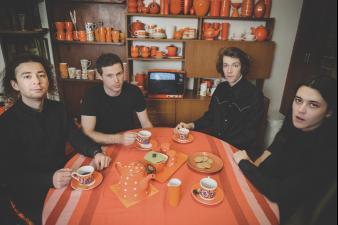 Tell us about your music. How did you develop your sound?
Essentially it's pop music in its many forms. Admittedly a lot of British influence although we've been told we also sound quite "Australian". The songs are lyrically focused with some groovy, rhythmic vibes to match. Our sound is constantly developing as well depending on what we're listening to or what what's inspiring us in general.

What’s your greatest source of inspiration for making music?
A lot of the time lyrics are inspired by moments of solitude and aimless rumination. All of the sudden a hint of poetry (maybe) presents itself. The same sort of thing can happen with an instrument or a band jamming.

What can punters expect from a High-tails live show?
A precisely bipolar delivery of emotive pop music. Theatrical hand gestures and sub-par banter.

What’s the best advice you’ve been given and who was it from?
"Always wipe before pulling your pants up" ~ Peter Cook

What Australian track would you play to cheer up someone who was crying?
'Need You Tonight' ~ INXS

What Australian track would you play to someone to make them cry?
'Reckless' ~ Australian Crawl

You’re the DJ at a party. The dance floor is pumping. What Australian track do you put on next?
'Older Men' ~ Snowy Nasdaq

What was the last local gig you went to? How was it?
We saw Cull and Sures play an event called VISIONS at Cliff Dive in Sydney (sadly we missed the opening band Morning Harvey). It was pretty amazing! First time we have seen Cull, definitely not the last!!

Tell us about the bands or people in the Sydney music community that inspire you.
There is a copious amount of good music in sydney which is coming to the surface. Just to name a few ~ The Carraways, Cull, The DeadHeads.

What are your plans for High-tails in 2014?
Lots of things to come but not too much to disclose at this point. We're currently finishing off the mixing of our debut EP "Sipping Tea To Make Music To Sip Tea To". It's really quite close to being done but we'll be releasing another single before we put out the whole thing. Then it's more touring and more writing for the remainder of the year and basically trying to jump on opportunities that come our way.