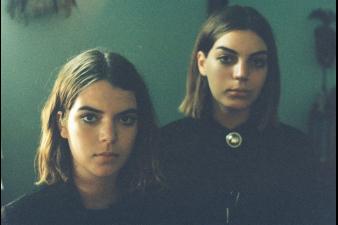 Meet the sister-duo you just have to hear! It's this week's Feature Artist, CLEWS.

We had a very musical upbringing and listened to a lot of harmony-driven bands like The Beatles and Crowded House. This instilled in us a love for classic songwriting and we try to create a sound that pairs ‘90s influenced production with big melodies.

Mostly it’s other people making music, and that intense thrill you get from seeing a great live band. We went to a gig at the Enmore a little while ago and Grace literally started crying because a sax solo was just so good and she couldn’t handle it. That is the feeling that makes us want to play more and write more.

What can punters expect from a CLEWS live show?

We actually live by a lot of great advice. Dad says, "fulfil your own promises" and Mum says "hey, what’s the worst that can happen?". Also, in regards to boyfriends becoming husbands, our Nan always said try before you buy.

'Cholesterol Heart (God Bless Ya)' by These New South Whales.

'To Think That I Once Loved' You by The Drones.

We caught our good mates Harley Mavis and H. Fanning and The Seagulls play back to back the other night, two birds with one stone if you will. It was a lovely evening and both sang with poise and grace.

We wish we could play guitar like Elizabeth Fader, we saw her with her full band recently and it was so impressive that Lily’s soul left her body for a moment. We also love the live show that the boys from PLANET put on and we’re very inspired by RACKETT’S DIY ethos.

We have a really great team around us now, so this year we’ll be releasing more music and playing some cracking shows. 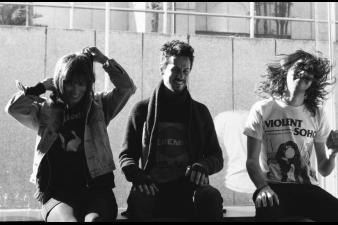 Melbourne's Damn Terran are our Feature stars! Their furious post punk will have you thrashing about all week on triple j Unearthed and Unearthed on digital radio.

I was surrounded by great music when I was growing up. Fortunately Leigh, my older brother, has good taste so I got on to listening to Nirvana, Devo, Sonic Youth & Faith No More, bands like that at a young age. I believe this affected what kind of music I wanted to write. Ali's influenced by similar grunge/punk bands like Wipers, The Saints and Magic Dirt. If you throw all those bands in a blender you'll have something like the Damn Terran sound.

A Damn Terran live show is usually full of sweat, blood & beer. We put a lot of energy into our live show. We feed off the crowd so the crazier they go, the crazier we'll go. Sometimes I'll go into the crowd, other times I'll end up crashing down on the drum kit. Either way we love playing live.

Tell us about the bands, producers and people in the Melbourne music community who inspire you?

Melbourne band 'High Tea' are probably one of the best live bands we've seen. Ouch My Face, Kids of Zoo, Udays Tiger are also favourites. We could go on for a while with great Melbourne bands we love (The Peep Tempel are also great!). We're big fans of Woody Annison's work with Children Collide/Hunting Grounds, also Nao Anzai who we use to master our recordings, he's a genius! Other people worth a mention are Celeste Potter and Brad Rusbridge. Both have done incredible artwork for bands around Melbourne.

Watch out where the huskies go, and don't you eat that yellow snow - Frank Zappa

We are touring our new single 'Rebels' in April/May. After that we will start recording and finishing up our album. We should have another single out later this year before unleashing the beast.

A 50/50 mix of electronic music - with its lush synth sounds, tortured filters & mod wheel action screaming its head off - and the raw power of a traditional rock band: Menacing guitars, super funky basslines and in-your-face drums. In the beginning we amused ourselves by thinking, "imagine if a band could join another band - complete opposites - like if Led Zeppelin joined the Basement Jaxx" or AC/DC and Daft Punk were onstage together. I think we were exploring that part of the world. Then there's the vocals, which can be sweet and haunting, or pop simple, or belting it out, depending on the needs of the song. We don't limit ourselves to any particular genre or style.

We don't really have a set formula as such. For most of the songs Glenn writes the music first & then we try different vocal melodies and write the lyrics last. Occasionally I write the lyrics and melody first and he adds the arrangement afterwards, whatever works. First and foremost, we try to write music that we'd like to hear ourselves if we were punters watching our own band. Sometimes it feels like it's writing itself and the ideas are just flowing out, but some songs.. you just need to know when to hit delete. We write and record all the synth parts in our home studio on computer, and then bring it into the rehearsal studio for the boys to develop and add their own nuances. When we're ready to record the organic instruments and vocal parts we go to Puzzle Factory recording studio out at Penrith.

Lots of planning goes into our gigs on all facets, from making sure a big touring act isn't playing the same night that might affect our crowds, to choosing a venue that has a good P.A., choosing support bands we'd like to play with and that we think punters would like to see, and how we should promote the gig. But once all that is done we are essentially a 4piece band with vocals, guitar, bass guitar, drums & laptop computer, & we work it baby, we like to put on a show.

We hear there is 'contemporary tribal dance' in your performance.. please explain.

We're interested in making music that either moves you or makes you move - that is, affects you emotionally or makes you want to dance. I like feeling and expressing music through my whole body, I really like to feel it in my guts, my pelvis. I like completely letting go and getting lost in the music. I've always been intrigued by the practise of accessing trance states & ecstatic states through movement and music, the way tribal cultures have done for aeons in African, Haiitian, Jamaica, Turkey and other parts of the world. Getting into an altered state with just the music as the drug! That ability has largely been lost from our culture and I think it should be brought back, so I'm leading the way. The 'contemporary' part is one half movement therapy - using your body efficiently & powerfully - and one half funky robot... or praying mantis, as the case may be...

What piece of gear could you not live without?

That would be the computer, it seems everything we do revolves around it, from writing our music, to making all our contacts in the music industry. In close second, my iRiver E10. It goes everywhere with me. It's an mp3 player, like an ipod, but it's much more sophisticated. It has a voice recorder, which I use dictaphone-style when song ideas pop up. I listen to radio on it as well as songs I have stored on there, and I keep some vocal warm-ups on it too, that come in handy before gigs.

What was the last music (vinyl/cd etc) you bought? what made you buy it?

For Glenn it was Depeche Mode's "Playing the Angel", on vinyl. If he really likes something he'll order it in on vinyl. He liked Depeche Mode's previous albums - they've always got at least two or three killer tracks, so it was pretty much a safe bet. It's a very dark album, but he loves all the tracks on it. For me it was Etta James, "Her Best". It's a collection of songs from her Chess Records heyday, when Chess managed to marry her scorching, screaming, gospel blues sound with pop songs for a winning new soul pop combination. I bought it as an introduction to her after I saw 1960s footage of her singing on the doco series Soul Deep: The Story Of Black Popular Music and was struck by her singing and realised I knew very little about her music. Am always delving to discover great singers.

It's a very hard Industry to make plans for, but you just have to keep sowing as many seeds as you can and see what comes up. That means applying for every festival and great support spot & going for every opportunity you can to keep moving the band forward & upwards. You definitely have to make your own luck. We are heading back north and interstate soon, and we have our eye on a visit to the UK at some point - our video is gettting played on tv over there at present.

Resilient! And harbouring some unique, world-class artists. Although, it can be a bit like an iceberg - only a few get to be on top, enjoying their time in the sun, so if you're not in for the love of playing music you're wasting your time.