Indie, Rock (Junip, The Shins, Everything Everything, ...) 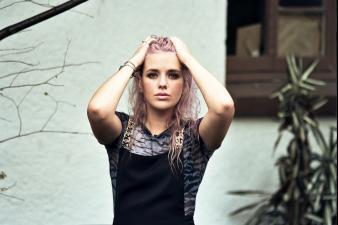 Airling is the moniker of captivating Brisbane artist Hannah Shepherd. Her impressive debut tracks show signs of greatness ahead.

Tell us about your music. How did you develop your sound?
I've been playing and writing music for pretty much my whole life. But this current Airling sound started with me writing the bones of songs with synths and Casio keyboard beats and then developing on these ideas in collaboration with Tom Iansek from Big Scary and Graham Ritchie (Emma Louise, Skinny Jean). I guess we just try to combine our individual tastes and creative colours to make a soundscape that allows the soul of the song to breathe. It's a pretty instinctual, organic and thoughtful process for us.

What’s your greatest source of inspiration for making music?
Other music, especially listening to a cool album while going for a run seems to really inject inspiration into my blood. As well, I seem to create and write a lot on my highs and during my lows. And my closest friends who I call family inspire me endlessly.

What can punters expect from an Airling live show?
A couple of best buds vibing out on some beats, samples, delays and a bunch of my feelings.

What’s the best advice you’ve been given and who was it from?
To be truthful, gentle and fearless. Emma Louise gave it to me one birthday but it's a quote from Gandhi and it just resonates with the way I want to live my life

What Australian track would you play to cheer up someone who was crying?
Mobius Streak by Hiatus Kaiyote cause it's just so damn cool and sexy.

What Australian track would you play to someone to make them cry?
Vapour by Vancouver Sleep Clinic, this track just seems to take you to some sad but beautiful place in my opinion.

You’re the DJ at a party. The dance floor is pumping. What Australian track do you put on next?
I'd most likely drop Holograms by Oscar Key Sung because it's one of my favourite tunes and it would probably inspire some epic sexy dance moves from people.

What was the last local gig you went to? How was it?
I think it was probably a house party garage gig that I had in my backyard for my cousin Jack Carty. O' Little Sister supported him and they were both breathtaking, two sweet songwriters and honest humans.

Tell us about the bands or people in the Brisbane music community that inspire you.
There are so many, Brisbane has an extremely supportive and inspiring scene. Foremost my band mate Graham Ritchie aka Gray man but also my besties Emma Lou, Mikey Sheehan and Thelma Plum, Sleepy Tea and Matt Redlich (killer producer/photographer/musician/human).

What are your plans for Airling in 2014?
I just want to keep releasing and making music that I love and care about. So we'll be putting my debut EP out later in the year and touring with a couple more bands before then... Asgeir and The Paper Kites. Apart from that I'm working on writing heaps of songs for an album that I'm busting to start recording.