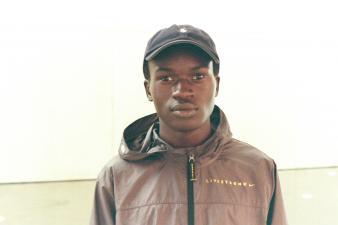 UV boi is an 18 year old producer from Brisbane making mellow yet heavy-hitting 808 music that's created a sea of feelings in our heart.

The first thing I attempted to produced when I began making music was sample based hip hop instrumentals. At the time I was listening to MF DOOM and his various aliases and Wu-tang also, this was back in 2010. The year earlier I was really into hardstyle and techno music, I know right, what a complete 180. Anyhow, I picked up interest in electronic music around late 2012 and started to dabbling with a lil bit of dubstep, trap and most recently Jersey Club. All under my first project named "EP". Throughout this time I didn't have any idea of music theory, I just had a keen ear. I took the time last year in year 12 to get piano lessons which were pretty beneficial. Fast forward to March of this year, which was when UV boi was born. With my new honed skills I returned to making hip hop but with this new UV boi spice.

The internet, especially via Soundcloud. There's just an endless stream of cool music on there. Some of the people I've come across on there are as young as 13 and are already doing wonders.

What can punters expect from a UV boi live show?

You can expect me dressed in a full Adidas tracksuit strapped in my durag squat for 20 minutes straight during the pre of my set. On stage, I use an APC and an MPD. Launching clips with the APC on Ableton and playing stripped sounds from my track on the MPD (eg. drums or vocal cuts or instruments, whatever really).

"Keep making music. you're really good at this" - Lochie Riordan

Most importantly though, are the people who I showed my first crappy beats to and have always been supportive and seen something. Shouts out to Erina, Eoghan, Cheyne, Kai and Joe Joe.

Renz - Look Good On Me

Ahhh I haven't been exposed to many local gigs that I haven't been apart. UV boi has only just become UV man, so I'm excited to experience those cool pub gigs.

Brisbane has a cool small community of electronic artists but not really many in the same line of my style though. I haven't connected with these other Brisbane artists yet mainly because they most likely don't even know my existence haha. In the future I'd like to get to know them. I had befriended two prior to creating UV boi. These cool dudes are ELI and Kraznov.

The plan for 2014 is to enjoy things and connect. A lot of cool things are happening very fast and all at once. I plan to work on an icy UV boi ep shortly, whilst still releasing singles here and there and maybe even some official remixes too. If you're a Brisbaner, you may see me out and about playing a few shows every now and then. Stay connected with me and we'll rock durags and squat together. SquatSquad