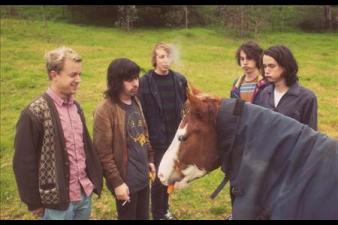 Melbourne 5-piece The Murlocs are one of the winners of our Harvest Festival competition. They'll be opening the festival at Werribee Park in Melbourne on Saturday 10th November.

Garage blues boogie. We developed our sound from covering songs that influenced us which ended up helping us discover our own sound. Our first gig at The Piping Hot Chicken Shop in Ocean Grove we played such tunes like Dale Hawkins - Suzie Q, Bo Diddley - Pretty Thing, Bob Dylan - Dirt Road Blues and Count Five - Psychotic Reaction. The Count Five cover is the only one we have kept playing since because it has been a hard one to let go of I guess.

You’re one of the winners of our HARVEST competition. What can Harvest punters in Melbourne expect from the Murlocs live show on Saturday 10th November?

Sweat and tears of joy.

What most excites you about playing and attending Harvest 2012?

Really looking forward to playing alongside the Black Angels and War On Drugs. Hopefully the show goes according to plan and we don't screw it up too much.

What’s coming up for you in the near future?

Hopefully we will release our debut album in early 2013, thats all we're really aiming towards at the moment as well as playing our own shows and of course Meredith Music Festival!