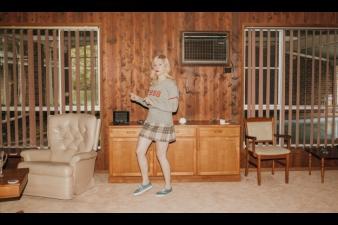 Sydney-based singer-songwriter Julia Jacklin creates beautiful alt-country that makes us feel happy and depressed in the best kind of ways.

Tell us about your music. How did you develop your sound?
I guess my origin story is classical singing lessons from 11yrs old. Did all the musicals, came I think 4th in a singing competition singing Killing Me Softly at Penrith Panthers when I was 12. Big stuff. Then my first boyfriend introduced me to some great music like Willy Mason, Fiona Apple and Radiohead and I could see what I actually wanted to sound like. But I didn't pick up the guitar until I was about 20 when a friend wanted me to join her band. I just try and make sure it's a good song at it's core and then the sound just comes from whatever happens in the studio and whatever I'm listening to at the time probably! So really it's just been a few years of trial and error learning the instrument, writing a lot and figuring out a different way to say simple things.

What’s your greatest source of inspiration for making music?
Wanting to be able to write about sex like Leonard Cohen.

What can punters expect from a Julia Jacklin live show?
I think they can expect music, and swaying, occasional light head-banging, alcohol, Some loud bits, some really quiet bits, some good bits, some great bits.

What’s the best advice you’ve been given and who was it from?
I've been reaching out a bit lately for some advice on songwriting. I asked a good friend of mine Adrian Slattery from one of my favourite Melbourne bands Big Smoke, if he had any advice on how to get over some writers block. He said something along the lines of, you just need to have an undying belief that you are a good songwriter and that you have the skills to make it happen. It sounds simple but sometimes you can just get so caught up in not feeling good enough that you give up before you even begin, who has time for that?  I'm just going to start staring in the mirror and yelling, "you're a songwriter dammit!" I don't want to waste time doubting myself anymore.

What Australian track would you play to cheer up someone who was crying?
Probably right now it would be 'I Wanna Be With You' by Flowertruck. The whole track makes me grin like a fool.

What Australian track would you play to someone to make them cry?
Bring back some bedroom teenage tears with Grinspoons 'Better off Alone’.

You’re the DJ at a party. The dance floor is pumping. What Australian track do you put on next?
Sampa the Great - 'Dutch Spring’.

What was the last local gig you went to? How was it?
There's a great night every Thursday at the Sly Fox in Enmore. I went there last week and saw Triceratops and The Baldwins. The quality of the bands there each week is ridiculous and it's always packed no matter who’s playing which is super nice to see in Sydney right now. The Baldwins are one of my local faves, they don't play often but when they do I'm there with a massive grin on my face, trying to maintain my cool whilst struggling to dance consistently over their time signature changes.

Tell us about the bands or people in the NSW music community that inspire you.
I'm surrounded by a great crew of people playing and hustling hard in Sydney right now. One of the great hustlers is Tom Stephens who is about to release his debut record which is going to be super ace, there's a band called NARLA which are one of the best live bands I've seen in ages. I want to be like them but I think I have to go back in time and practice a lot more. My Phantastic Ferniture band mates Ryan K Brennan and Elizabeth Hughes who are so multi talented and hardworking it makes my head spin.  A singer songwriter Ainsley Farrell who writes these great songs and has this incredible depth to her voice. I saw The Pinheads the other day and it was so bizarre but it made me want to be a bit more fearless and weird on stage. Plus a million other people.

What are your plans for 2016?
Touring the single, heading to the UK for Great Escape festival and some other things next month, and most importantly releasing my debut record around September. 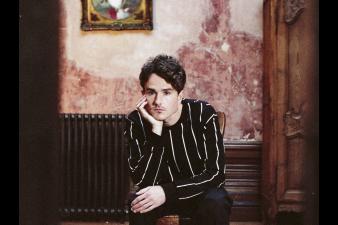 Patrick James' expertly crafted and poignantly performed indie-folk jams have won him a spot on the 2012 Festival of the Sun line-up.

I have always been into the old school acoustic folk sound, I think it came pretty naturally to write music that was in that vibe. In saying that, some of the bands and artists I am listening to at the moment are slightly different to what I would normally. I think it's giving me a bunch of fresh ideas about how to develop the sound more. I have also been playing with a full band for most of the recent shows so that's been a huge step towards improving!

We are going to be playing a lot of new tracks which we are pumped about. Theres going to be a lot of harmonies and crazy banjo solos.

What most excites you about playing and attending Festival Of The Sun 2012?

To look out to the audience and see most of our mates will be a great thing! It's such a chilled vibe at this festival. We were always the kids up the back of the crowd watching from a distance so it's going to be a fun day. Can't wait to head home and play.

I remember seeing Wolfmother at the Horden when I was 14 or 15. Tried to get into the mosh pit with a mate… ended badly so I stuck with acoustic music. Memorable night!

I have just finished recording a new EP with Scotty Steven who plays banjo in the band. It's going to be released in March and there will be a headline tour to go with it too!

Slowly taking over the world thanks to Goyte!