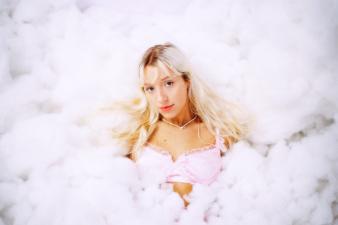 When I first started making my own music I was listening to a lot of Lana Del Rey and The 1975 and they have stayed strong influences throughout my music making! I think I was really attracted to the heavy-reverb and ambient sounds that just seem to immerse listeners in a bubble of floaty heaven!!

LOVE AND MALES cuz I’m so goddamn emo-chanel (and a hopeless romantic). My emotions have taken me down some weird routes and it’s always fun to reflect on through a BOP.

What can punters expect from a yergurl live show?

Me and my twin sister looking poppin’, perhaps a sneaky bucket hat or two, songs you’ll wanna cry to later, and if I’m lucky, someone walking away with an epiphany!! This is a place for people to get real with their feels if they’re open to it.

To only release things that TRULY represent yergurl & me in a way I’d like to be represented. Artists are vulnerable to feeling pressure to conform or to just say “this is good ENOUGH” but mum reminds me that it’s okay to take your time, to send collabs back a few times etc. so I won’t have to look back on something under my name and cringe.

‘Not About You’ by Haiku Hands. How could anyone resist a boogie when Haiku Hands is on? Even someone as emo as me would have to pause a sook sesh for this BOPPPPPP.

What Australian track would you play to someone to make them cry?
‘Potential’ by Kllo. Let’s pretend I haven’t wailed over ex’s to this song time and time again.

You’re the DJ at a party. The dance floor is pumping. What
Australian track do you put on next?
HAIKU HANDS NOT ABOUT YOU!!!!!!!!

I supported Congrats (front man of Slowly Slowly) for his first show ever and it was super dope. My bff got super emotional. I usually feel deceased after a gig but I couldn’t leave the crowd for this… I was feeling TOO MUCH!

Aphir!!! She has the prettiest voice and I love the way she produces her vocals. Her music is really unique, chill and 100% inspiring. Her sounds make my ears smile!

Lots and lots of writing, collabs, releasing some new music, and even some videos!!! Hoping to find myself on some PHAT stages this year!!! I make indie/pop music that kinda feels like you’re sinking and soaring at the same time. My sound has developed pretty naturally over the last couple of years through writing A LOT and learning about production. I’ve also loved collaborating and right now I’m loving writing to a beat!

It’s generally from those around me! Sometimes a friend can tell me a cool story, or I’ve been through something myself. I’m jotting down lyrics constantly because my brain never switches off from that stuff.

What can punters expect from an Essie Holt live show?

Lots of light and shade. I like to bring people up and then take them straight back down! My set up is the moment is myself on vocals, and my friends Hayden and Tim on keys/guitar/drums.

To not overthink things and just run with how I feel. This was from my wonderful producer Stef.

Ooooh! I think it would be 'Chameleon' by Pnau.

I saw CXLOE at Howler. She was so great!

I love the Melbourne scene! Over the years I’ve really looked up to women like Courtney Barnett, Jen Cloher and Clare Bowditch. They’re super inspiring to me as humans.

I’m working on a body of work which I hope to have out before the end of the year! I’ve got another single coming soon and lots of fun shows on the horizon!