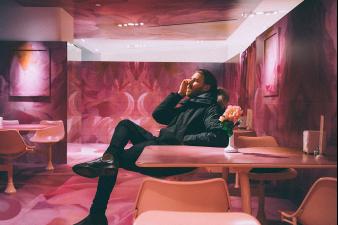 Read Interview
Tell us about your music. How did you develop your sound?
I am constantly developing my sound, and I think that is quite evident in the work I have been releasing, that it's not really set it one area completely. I studied guitar at the Victorian College of the Arts playing jazz so I think that would be one really big influence, the guitar, the instrument I am most proficient at. I think my sound really stems from the blend and melding of acoustic instruments with electronic sounds. I started experimenting with electronic music while I was studying because I was always curious and searching for sounds I hadn't heard before, and there was this huge world of electronic music which I never ventured into with so many possibilities with.
What’s your greatest source of inspiration for making music?
I am very inspired by stories. I love how you can really get into a story and it totally takes you somewhere else, and it feels real. That's what a good film or book or song does for me. And I always want to recreate that. Some sort of escape. I think that also leans toward stories of other real people. I don't often write about me, I like to imagine what these experiences that people around are having would be like, and to try to really explore that and empathise with that.
What can punters expect a Lanks live show?
I think the live show brings another element in. I usually have a few other people join me on stage, and it's pretty energetic music with the live instrumentation added, particularly drums. It gets pretty rocky at times actually. The other thing I like to do is really mix it up, play a song solo and there can also be a sneaky flute solo sometimes.
What’s the best advice you’ve been given and who was it from?
When I joined Andy Bull for a few of the dates on his tour earlier this year he said something that I found really grounding. He just said (and I hope he doesn't mind me quoting him) 'it's all a game'. To me this really meant not too worry too much or take it seriously, and don't get hung up on the result of how your work is received or whether everyone loves it or not. Don't take it all personally. Just keep doing your thing and remember it's not the end of the world if someone doesn't like your stuff; write music lots and get better and better at it, that's the best way forward.
What Australian track would you play to cheer up someone who was crying?
Dorsal Fins - Monday Tuesday
So much good energy in this track, get's you up and going whenever you need it.
What Australian track would you play to someone to make them cry?
Hayden Calnin - For My Help
Killer track, killer artist. Very excited to hear the full album when it's out. Not far off now!
You’re the DJ at a party. The dance floor is pumping. What Australian track do you put on next?
Mansionair - Hold Me Down
I'm more of a chilled party goer so this would be where I would be very much in the zone on the dance floor.
What was the last local gig you went to? How was it?
I saw Foreign National playing at the Gasometer. It was great, they're a top notch band. It was really energetic and it's one of my fav rooms to watch bands in Melbourne...and I live nearby which is a bonus.
Tell us about the bands or people in the Melbourne music community that inspire you.
There are so many amazing bands and song-writers that inspire me. Matt Kennealy of Canary is one of my favourite songwriters ever, you'll be hearing more from him in the future I feel, amazing lyricist. The guys from Dorsal Fins/Saskwatch/Eagle and the Worm are good friends from uni and are some of the best musicians you'll ever see play anywhere, amazing songwriters too (Liam McGorry/Jarrad Brown).
The guys from I'lls and also Klo are big influences on me musically, I think their work is beautiful and sonically challenges all your ideas and inspires you to try new ideas and experiment more with beats and synths.
I really could write about artists in Melbourne for another few hours but I'll just add Ainslie Wills, No 1 Dads, Big Scary and Deja as some other ones that I am a big fan of and have listened to a lot that push boundaries and I love their music.
Sorry for everyone I missed!
What are your plans for the rest of 2015?
The main thing is to keep writing and get better. I am deep in writing mode at the moment, got a whole heap of demos for the next EP or LP and I'm working on my production skills also. There are other plans but I don't want to spoil too much so I'll leave it at that for now.
View Profile Hide Interview
Download the triple j Unearthed app: