Peta and the Wolves 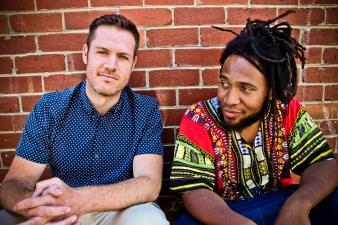 Man Made Mountain are a Melbourne-based duo comprised of producer Billy Hoyle and vocalist Cazeaux O.S.L.O. They create uplifting hip hop sounds inspired by the likes of J Dilla, Remi & Sensible J, and by the the music of Brazil.

Read Interview
Tell us about your music. How did you develop your sound?
We’ve both been making music individually and in other settings for quite some time prior to collaborating as Man Made Mountain, but our tastes in music are very similar and we both share a love for the music of Brazil, which was a key in developing Billy’s sound as a producer and giving a direction to our approach to hiphop. Our sound as a duo is still developing and will continue to include live instrumentation and new influences.
What’s your greatest source of inspiration for making music?
Hearing other music, and wanting to contribute to that in our own way, whether the idea starts as an alternative melody or a percussive addition. Day to day occurrences influence the direction of that inspiration, but ultimately it’s other music that’s the source.
What can punters expect from a Man Made Mountain live show?
Many raps, a little singing, some scratches, and eventually live horns.
What’s the best advice you’ve been given and who was it from?
Hoyle: Something Sensible J said surely. He’s so sensible. I call him Yoda. Na I can’t remember exactly but he gave me so many tips when I started making beats that they still pop into my head when I’m messing around with ideas and tinkering on the MPC today.
O.S.L.O. :  My Grandpa, "Always eat well before you come."  Nuff said.
What Australian track would you play to cheer up someone who was crying?
Tame Impala – Be Above It.
What Australian track would you play to someone to make them cry?
Hiatus Kaiyote – Building A Ladder (I'm crying just thinking about it)
You’re the DJ at a party. The dance floor is pumping. What Australian track do you put on next?
Little River Band – Reminiscing
What was the last local gig you went to? How was it?
We saw the Average Rap Band play at Howler last week. They’re New Zealanders who are based in Melbourne now. They’re brilliant writers and they were great live.
Tell us about the bands or people in the Melbourne music community that inspire you.
There’s heaps. Remi & Sensible J inspire with the incredible music they’re creating and the places they’ve taken it so far. Hiatus Kaiyote for the same reasons. Silent Jay is making some incredible music. Melbourne’s thriving and there’s so many people creating and performing music around town all the time, so the inspiration is everywhere. DJ wise also, it’s a healthy scene. Almost all the staff at Northside Records in Fitzroy are great DJ’s and play awesome stuff you’ve never heard before. Local radio is on the strength, shout out Richie 1250, Emma Peel and anyone else dropping Les Baxter.
What are your plans for 2016?
Releasing an EP in April, and some touring soon after that. If all goes to plan we’ll be releasing another EP later in the year and other sonic tacos for your ear.
View Profile Hide Interview
New