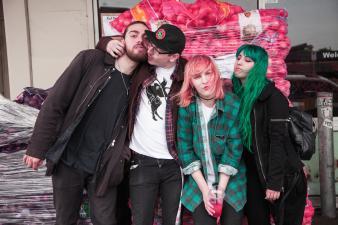 Melbourne folk-punks The Football Club have proven they're Ones To Watch in 2017 with a string of absolutely devastating hits. Hop on now before this train leaves the station.

We call our style of music 'passion pop' - it's a cheap mix of folk, punk, folk-punk, and everything in between - we actually started off as a very earnest folk band (Leah was going to learn the mandolin for us!) before realising that the true path of enlightenment is overdrive pedals and crying.

The human condition, social injustice, and the career stability that only alternative rock music can provide.

What can punters expect from a The Football Club live show?

Punters can expect to see the rock band The Football Club play a number of our original rock songs, in an order we will determine during the panicked 15 minutes between the last band finishing and us having to start our set.

'Don't go to law school, son - everybody knows the real money is in folk-punk'.

Ceres at Howler - they're the coolest, their album from last year was totally in my top ten! Huge energy, huge vibes.

We love the Melbourne music community! Big ups to Two Steps on the Water, Camp Cope, Poison City Records and Sad Grrrls Club (although they're not strictly Melbourne!).

We just released our song 'Ivy', which comes off a 7" that we're gonna put out in late May/early June with another song called 'Spencer'! Then we're touring through May with our pal Alex Lahey, as well as some other things you'll learn about soon. Then towards the end of the year, we're going to head into the studio and see what comes out...