Queen of pop beats, sass and a whole lot of fun is Sydney artist and this week's Feature Artist, MUKI!

Tell us about your music. How did you develop your sound?
I have always had a fascination with Spice Girls and J Pop artists, and I would chat to Phebe Starr and Aaron Reyes (my producer for this EP) about the kind of sounds we would use. They both came across Sophie at SXSW and they introduced me to PC music. I fell in love instantly with the production. Aaron came out from the States for 2 weeks and we locked ourselves in my studio and wrote the whole EP!

What’s your greatest source of inspiration for making music?
At the moment I am fascinated by interesting production. I think it’s such a great time in music. I am given the freedom to say whatever the f*** I want. I use my songs to communicate what I want to the people who have underestimated me.

What can punters expect from a MUKI live show?
It’s like Spice Girls meets trap, except there aren't 5 girls, it's just me and my curly haired MD doing synchronised dance moves.

What’s the best advice you’ve been given and who was it from?
Phebe Starr said to me the other day, "nothing comes for free" and that's a pretty good life motto. Nothing in the music industry is perfect, so you have to just take it as it comes. Work hard, know why you are doing it and stay true to who you are.

What Australian track would you play to cheer up someone who was crying?
Mallrat with 'Better'. She is such a queen!

What Australian track would you play to someone to make them cry?
Basenji with 'Mistakes' (ft. Tkay Maidza). It's such a good tune. It makes me a cry a little about how good it is. Tkay’s vocals are fire on this track.

You’re the DJ at a party. The dance floor is pumping. What Australian track do you put on next?
Sneaky Sound System with 'Pictures'.

What was the last local gig you went to? How was it?
I saw Oh Boy the other week and it was rad. He has cool hair and I love what he is doing with his production.

Tell us about the bands or people in the Sydney music community that inspire you!

The Sydney music scene has such a cool vibe right now and I have some amazing friends that are doing a cool hustle. I am inspired by Phebe Starr, ASTA, OH BOY, Basenji, DONATACHI, Cosmos Midnight and Nina Las Vegas. I love them all!

What are your plans for 2018?
I am dropping an EP early next year. I also have some collaborations coming out and I am planning a writing trip to the States. 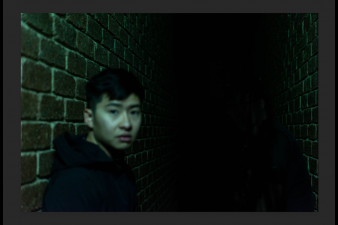 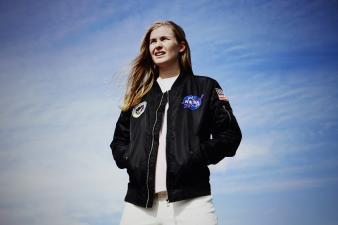 Sydney songwriter, Alex The Astronaut is on the opposite side of the world studying a Maths and Physics degree on a soccer scholarship in New York. That's not a combination of words you'll hear every day. She's an incredible story-teller who's able to weave clever lyrics into beautifully layed out songs. She's also the perfect person to talk to a generation right now.

I started writing when I was about 12 but I knew to be good at it I would have to really work hard. I tried to pick out what I thought was good and bad in lots of different songs and apply those things to how I wrote. They were mostly simple rules like think of something other than a cliché, don’t write cheesy love songs, get to the point and move on. I knew I liked telling stories so that’s how my songs started so I used my little rules and I stuck with that!

It sounds lame but people. There are so many interesting people that do great things that make me want to be better at whatever I’m doing. I think that’s why I like travelling around so I can hear all different stories because I think it makes you appreciate what you do have so much more and want to make a difference with the abilities you have.

What can punters expect from an Alex the Astronaut live show?

They can expect a science dork telling stories on stage with a guitar haha. I like being on stage, I think I’m far less awkward there than I am most other places which is strange. I try to keep everyone involved and have a bit of a chat. I explain bits of my songs that I think are important and why I wrote them.

My English teacher in high school said keep it simple, say your point then get on with it. I wasn’t very good at English but it helped with writing songs and I always think about that when I try explaining something that is taking too many words.

Probably Courtney Barnett’s ‘Three Packs a Day’, because no one can cry to a song about 2 minute noodles.

Julia Jacklin’s ‘Don’t Let The Kids Win’ gets me every time. I heard her play it live and I couldn’t stop listening, it’s amazing. You’re the DJ at a party. The dance floor is pumping.

What Australian track do you put on next?

I went to Jamie T at the Enmore and it was really cool! I hadn’t listened to much of his music and so I just stood up the front at the side by myself and watched. Everything about it was great he’s a really cool talented performer and everyone was so happy and excited to be there. Loved it.

I’ve met a lot of female Sydney artists recently and they are so inspirational. Jack River and Lisa Mitchell were the first two girls I met and how humble and kind and talented they are is incredible. Montaigne is super cool too she also likes soccer so we bonded over that. My managers and the music people that I work with almost make me cry from how inspiring they are. I can’t believe how lucky I am to work with all of them. They’re like family to me.

You’re currently studying a Maths and Physics degree on a soccer scholarship in New York, how has/does music play a part in those roles?

I think music keeps me curious to find out new things so with physics and maths it fits in pretty well. Whenever I’m a bit overwhelmed it’s something that cheers me up so that helps me keep level headed and studying hard. I don’t think it plays a huge role with soccer but as a team we do listen to pump up music before the games!

I’m releasing my debut E.P. “To Whom It May Concern” in late March, which I’m really excited about. I’m in New York at the moment so I’m going to play a few shows here before graduating in May and then coming back home to Australia. Then it’ll be playing shows and recording and getting more music to the world!