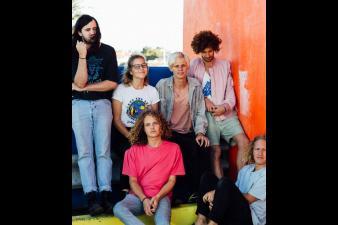 What do you get when you combine a heavy dose of '90s influence with a 6-piece outfit? A massive wall of sound. That's Dreamy Rimmy in a nutshell, and you can catch the Perth shoegazers bring it at Laneway in Freo!

It's pretty 90s inspired. Lush pop songs with shoegaze/psych/trip hop vibe. Ali's all about that stuff and she writes most of it so that makes sense.

Ali comes up with the skeleton of the song but I think she just hears stuff she likes and learns from what she hears.

You'll be opening up Laneway for Unearthed this year. What can punters expect from a Dream Rimmy live show?

Well we have 6 members. So there's a fair bit of noise. Ali and George do lots of harmonies. lotta guitars and synths and stuff. We try and do the wall of sound thing.

You're The Voice - John Farnham

We just played North Freo pub crawl show in Fremantle. There were a lot of bands and it was v. kool.

So many good Perth musos & great community vibe. A++. It's very incestuous. Most of the bands have sharing members with other bands so it feels like a bit of a collective.

Release our EP, record LP, tour a bunch, do some cool stuff.