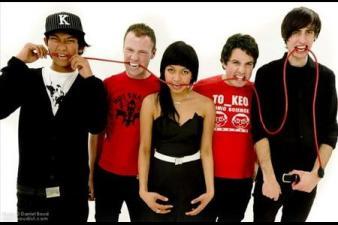 With a reputation for delivering a high energy live performance, Young & Restless have certainly been making their audiences sit up and take notice. They play riot party feel-good music with hot, noisy, dirty female vocals.

Who’s been a big musical influence for you? What inspires you?

We have so many – hip hop, metal, riot grrl, indie, punk, metal – we have the weirdest collection of CD’s when we tour – one minute it could be Tori Amos, then it could be Some Girls or Circle Takes The Square. What inspires us is dedication and passion – I hate seeing shows where everyone stands still on stage, no movement, no sweat, no fluidness. I like excitement and energy – whether this translates in the actual playing or the physical aspects of it. Musicians like Carrie Brownstein (Sleater-Kinney) inspire me personally – they really have their tone and style nailed down.

Tell us about the local music community you are part of.

Canberra is very hardcore based in its music – lots of metal and aggression. It’s very close knit – everyone knows everyone and is always ready to help each other out. A lot of the venues are closing – there are virtually no all ages shows anymore which is a huge shame.

What’s the best thing about being in Young & Restless?

Meeting people who truly appreciate what we do and are genuinely thankful for it.

What's your dream gig? Where would you perform and who's in the audience?

Our dream gig would probably be playing with The Bronx in the US – maybe New York. The audience would be pumped and crazy and the venue would have to be small and intimate with bodies flying everywhere.

Hopefully get to the UK and US around February / March. Also, record our album or EP and keep playing shows.

getting better and better…