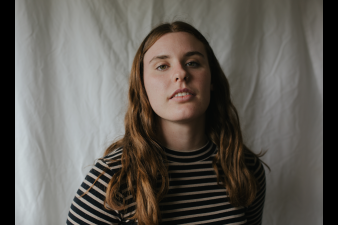 Jumping on stage with Skegss, Tired Lion, Mallrat, Bakerboy and more, is this year's Live At The Steps comp winner, Nancie Schipper!

I grew up listening to alt-country/folk music and was making that kind of music up until recently. Over the last couple of years, my songwriting has developed towards an indie-pop/folk sound, whilst still carrying elements of the music I used to play. This year I have also started playing around with a ‘bigger’ sound, exploring synth ideas, as well as challenging myself more vocally.

I would have to say, other artists. There have been so many times where I have listened to songs and felt instantly connected to them, which then inspired me to push myself as a songwriter and try different things. Aside from that, personal experiences and the people around me!

What can punters expect from a Nancie Schipper live show?

Backstories behind some of the songs, and lots of guitar dancing (don’t know if that's even a thing but it is now)! I love feeding off the energy from the crowd and giving it my all every single gig, no matter how big or small!

I’m not sure where I heard it from, but for as long as I can remember, I have had the phrase ‘everything happens for a reason’ stuck in my head, and it has always helped me carry on when things haven't worked out. I was set to record my album early this year, but the recording dates were suddenly postponed until June for various reasons, after months of planning and excitement. It sucked at the time, but in the meantime, I wrote the first single ‘Corner Store’ off my upcoming album, so everything worked out perfectly in the end.

Hmmm… ‘Strawberry Kisses’ by Nicki Webster wouldn't fail to cheer up anyone I reckon!

‘One Crowded Hour’ by Augie March.

What was the last local gig you went to? How was it?
I’m only seventeen, so, unfortunately, I rarely get to see bands live. BUT I have managed to catch mind-blowing shows from Gretta Ray, Paul Kelly, Missy Higgins and Tash Sultana recently!

Tell us about the bands or people in the Western Victorian music community that inspire you.

I’ve been inspired by so many different people! Brady James, Tom Richardson and Hey Mammoth are artists whom all first spring to mind both musically and as people, and they are incredibly down to earth and genuine. They have done so many different, amazing things with their music and I think they are all crazily talented.

I’ll be finishing off my last year of high school, and writing and recording some new music!! I’ll be 18 in May, so seeing and playing a lot more live music and getting my P plates is definitely on the cards!