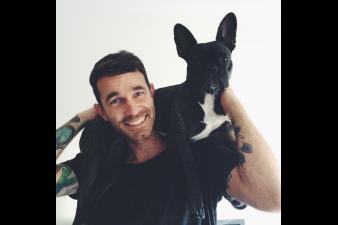 When Paces isn't busy doing remixes for the likes of Parachute Youth, YesYou and Sampology, producing music for Tkay Maidza, dropping fantastic bootlegs and whipping dance floors into a frenzy right around the country somehow the Gold Coast producer finds time to release his own brand of excellent tropical-infused sizzlers. It'a little bit Jersey Club, a little bit future beats and a whole lot of fun.

Tell us about your music. How did you develop your sound?
I started out making really slow jams and trying to use as few elements as possible. It was a really new and exciting way to make music for me because at the time I was mainly producing dubstep and moombahton (as part of my group ’Surecut Kids’), which can be very busy styles. Eventually though my influences widened and I began making more danceable tunes, taking influence from Jersey Club, Future Beats and Garage. But during the evolution I’ve always been fond of using tropical sounding instruments like kalimbas and steel drums.

What’s your greatest source of inspiration for making music?
Plane trips. I tour a fair bit which means I have plenty of time to listen to music on planes. I like to use it as a bit of down time and soak in a good album or mixtape. Usually I end up making heaps of notes in my phone because as soon as I switch my mind off and relax to someone else’s music, the ideas come flooding in.

What can punters expect from a Paces live show?
I have stripped-down versions of my originals, remixes and bootlegs, mixed so that they flow like a DJ set, and then I play the missing elements on an MPD. So for example the first half of a song might be missing the drums, and the second half missing the kalimbas. As that tune is playing, I’ll be hitting the pads on the MPD and playing the drum sounds or kalimbas in real time. Nothing is quantised, so if I fuck up you’ll definitely hear it!

What’s the best advice you’ve been given and who was it from?
My sound engineer is Danielsan from Koolism. I’ve been going to him for mixdowns and mastering for ages. Over the years he has been very patient with my lack of knowledge and will often call me up and drop science on me for an hour. Pretty much every time he’s done that, it’s been the best advice I’ve ever been given. I think the biggest breakthrough so far was the less-is-more lesson. I used to want my songs to have so much bass in them and I’d try to cram it in amongst everything else. He taught me that if you remove most of the other elements, it gives you more room for the bass. Seems simple now but at the time it was pretty groundbreaking for me.

What Australian track would you play to cheer up someone who was crying?
Wave Racer’s tune ‘Streamers’ would cheer anyone up!

What Australian track would you play to someone to make them cry?
Anything from Ta-Ku’s ‘Songs To Break Up To’ album. So many feels!

You’re the DJ at a party. The dance floor is pumping. What Australian track do you put on next?
Either Crooked Colours - Come Down (Palace Remix), or anything from Deer’s EP. Either way it’s a safe bet!

What was the last gig you went to? How was it?
The last time I just went to a gig and wasn’t playing was Laneway Festival in Brisbane. It was so rad. Getting to see Cashmere Cat and Daughter were both huge highlights for me.

Tell us about the bands or people in the Gold Coast music community that inspire you.
My homie Atticus Beats just moved here recently from Townsville. He came over the other day to borrow my studio and I was really inspired by the way he had treated some vocals in his song. It was something I hadn’t seen before and it got me gassed to try some new things.

What are your plans for Paces in 2014?
I’m about to tour my current single ‘Can’t Touch Me’, so I’ll be going all over the place through June/July. I’ve got Groovin The Moo and Splendour coming up. I’ve produced a tune for Tkay Maidza’s EP. I’ve got remixes coming out for SAFIA and Sietta. Plus I’ve been working on an EP with this band from London called Youth. Heaps of stuff to keep me busy!