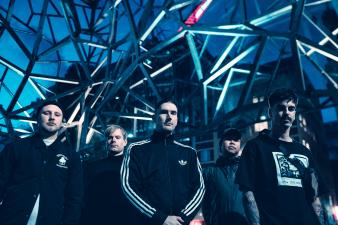 It's time for you to meet your new favourite band and this week's triple j Unearthed Feature Artist, Bad Juju. Hailing out of Melbourne, the five-piece outfit have recently been on tour supporting Trophy Eyes. They've also just dropped their brand new single 'Moving On' and it's a strong hit from the heart.

Our music is definitely fuelled by the emotions we were feeling during the writing process. Sometimes the songs turn out bright and happy, other times they end up darker and heavier because of that. All of us have played in heavier bands than Bad Juju in the past but really wanted to get back to our punk rock/grunge roots because we all enjoyed that kind of sound when we were growing up. Each of us brings a whole bunch of influences to the table during writing and the end product is developed through a mix of those influences and what emotions we are feeling at the time.

One of the biggest sources of inspiration is watching other bands we love playing live and killing it. We all grew up getting down to local shows, watching bands and being a part of the music scene. We've always enjoyed being a part of it and having a chance to keep doing that in this band has been so much fun for us. We just want to keep writing music so we can get out there and do it more!

What can punters expect from a Bad Juju live show?

It's always going to be high energy for us on stage. The more people getting involved, jumping around and getting crazy, the better as far as we are concerned.

Nick: Mum always said no matter what you do, try to be the hardest working person in the room.

Russ: I've been to a bunch of shows lately, I'm not sure which was the most recent! But a standout from the last 6 months would have to be Dear Seattle at Northcote Social Club. It was sick. People went nuts and it was a great vibe.

Melbourne has so many hard working and talented musicians that it's hard to pinpoint one or two! We've been lucky enough to work with a few great musicians when recording our songs including Callan Orr of 'Dream on Dreamer' and Beau Mckee who used to play in 'Closure in Moscow'. They both challenged us with each track to try new things and step up our game. We learnt a lot from those sessions. We have gotten a lot of love from music fans in Melbourne so far and the triple j Unearthed crew that have given us a lot of confidence in what we are doing and that's driving us forward!

We have finished recording our debut EP which will be coming out very soon. We plan to play a few shows around that and get interstate a lot more! We can't wait to release the EP and show everyone what we've been working on. We also have some awesome shows coming up with Dream on Dreamer and Trophy Eyes that we are looking forward to this month and in July! All the dates and info are on our Facebook page for anyone who is interested!