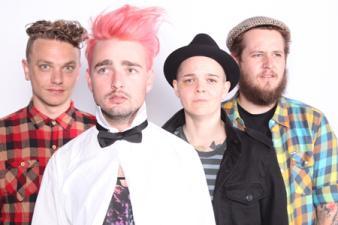 Originally L&TFY was intended as a jam band. We played a Monday night residency at a Tea House in Brisbane’s West End for over 12 months and just experimented with ideas. In the early days, there was a kind of rotating membership until eventually the perfect line up just fell into place. We found ourselves on a gig together and decided to take some of the concepts we’d been messing with on the jam shows into the rehearsal room. We quickly discovered that the Family Yah was a little like a musical Young Ones, each totally individual, into different shit and yet somehow harmonious. Laneous is the Rick of the Band (the arty pansie), Tilla – Neil (the tall gentle dreamer), General Beats – Vyvyan (punk ass bitch), Peet – the semi sensible Mike and I guess Poz Serps is Alexei Sayle. Slam that through a meat grinder and wah-lah!! Grunty Rudeboy Soul & Croon Punk! Don’t expect any cameos by Cliff Richard though..

What can the Parklife festival audience expect from you live gig?

The spring has sprung, the grass has rise, I know where the Birdies is… We’ve been on the road for the past month Launching our Debut LP “St. Ill Regal” so Parklife couldn’t have come at a better time for us. You can expect the usual unexpectable extra spectacles – the Laniac of Love putting the cat amongst the pigeons, the Family Yah in full affect plus the all singing, all dancing, all romancing Bird Fire Choir and likely an onslaught of special guests and treats. We’ll be playing plenty from the record plus sneaking in a whole bunch of new material. Putting the Life Love back in Parklife!

Who are you looking most forward to see at Parklife?

Definitely Cool Kids, their “Bake Sale” record has been a big influence on Bake Staley (aka Lanee). Keen to check out Lady Sovereign too.

The rest of 2009 sees us continue to play up and down the East Coast. There’s a few festivals on the L&TFY calendar that we are pretty excited about and then it’s looking like we’ll be heading over to New Zealand early next year to Launch the record there. Otherwise, we’ve already written more than enough material to record our next full album. Recently we shacked up in a pad in Melbourne and begun pre production for this, which is really exciting. Whilst most of our songs grow organically in the rehearsal room and live, we have also written a lot by experimenting in the studio. So I guess, by recording our ideas we are also evolving our live show in a way. Above all, The Family Yah is a group of best friends who genuinely love making music together. So no matter what, the future will see us doing that – be it in our living rooms or on the road.

Where women glow and men plunder, where beer does flow and men chunder.

Punk, Roots (could be funky or sultry but a bit sulky, Billie Holiday, Karen Dalton, ...)

peter b & the homeless souls